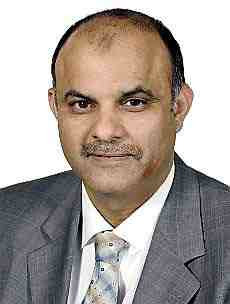 Werneth Councillor Khurshid Ahmed is on police bail after he was arrested on suspicion of election fraud.

Councillor Ahmed (48) is a Liberal Democrat candidate in the May 3 local elections.

He was arrested yesterday. but because he was bailed until July 18 pending further inquiries, he will continue to contest the Werneth seat he has held for three years.

Oldham Police Det Sgt Terry Broome, who specialises in electoral law, confirmed that the investigation centred on a property at 176/178 Manchester Road, Werneth, a former launderette.

He said: “We are making a number of further inquiries involving other properties.”

Councillor Ahmed, of Lacrosse Avenue, is a well known local businessman and former chairman of the Asian Business Association.

He was a Labour party member until a row over local politics in 2003, when he switched to the Liberal Democrats and successfully won his Werneth seat.

At his office at K and Z Textiles in Suffolk Street, Werneth, this morning he declined to comment on his arrest.

Asked if he would continue as a candidate, he referred all inquiries to his party’s leader, Councillor Howard Sykes.

Councillor Sykes said: “Councillor Ahmed voluntarily reported an issue, in person, to the police on Monday related to the electoral roll for his ward after it became apparent that something may be wrong with the registration of an elector that Councillor Ahmed had been asked to validate.

“The police asked him to come back on Tuesday which he did. Councillor Ahmed was then interviewed under caution and bailed until July.”

Councillor Sykes added: “There is no mechanism for Councillor Ahmed not to stand or to step down from the election. I work on the principle that a person is innocent until proven guilty.”

A police spokesman confirmed: “A 48-year-old man has been arrested in Oldham on suspicion of forgery and providing false information to the electoral registration officer.”

The Chronicle has been told the arrest is in connection with alleged irregularities with postal vote applications at two properties in Werneth.

All candidates and agents met the head of Oldham Police, Chief Supt Caroline Ball, recently when she warned that any allegations of electoral misconduct would be treated seriously.
Posted by The Green Arrow at 4:43 pm No comments:

A Leading Labour Party official has appeared in court accused of benefit fraud. Wigan Constituency Labour Party Chair Dorothy Abbot, 56, is alleged to have received more than £28,000 in incapacity benefit over a four-year period despite also working for Wigan Council.

Abbot is charged with having "dishonestly failed promptly to notify Department of Work and Pensions of a change in circumstance that she knew would affect her entitlement to incapacity benefit namely that she was working". The offence is alleged to have been committed between December 12, 2001 and November 7, 2005.
http://www.wigantoday.net/viewarticle.aspx?articleid=2019517&sectionid=66

A Portsmouth councillor has been arrested by police over allegations of corruption, it has been revealed. Jezz Baker, who is a member of the city's planning committee, was arrested on Tuesday by detectives investigating a complaint by a member of the public.

Chief Executive David Williams said the council was fully assisting the police but could not comment further because it was an on-going investigation. Mr Baker, of East Cosham, is the Conservative councillor for Hilsea.
http://news.bbc.co.uk/1/hi/england/hampshire/6589353.stm
Posted by The Bournemouth Nationalist at 11:34 pm No comments:

A PROMINENT Worcestershire councillor has been charged with possessing indecent photographs of a child.

Malvern Hills district councillor Michael Angell is accused of 17 separate counts of possessing indecent photographs on Wednesday, November 15, 2006. The Liberal Democrat/Green councillor, who was elected in 2003, appeared at Worcester Magistrates Court on Tuesday, April 3. The case was adjourned until Wednesday, May 23, to enable the Crown Prosecution Service to decide on the seriousness of the charges. If he is found to be in possession of the images and they are deemed to be serious, then the case may be sent to crown court.
http://www.worcesternews.co.uk/display.var.1322894.0._child_councillor_is_charged.php
Posted by The Bournemouth Nationalist at 3:51 pm 2 comments:

A COUNCILLOR has been charged in connection with alleged misconduct during last year's local election. Miranda Grell, 28, who represents Leyton ward, today was charged with four counts of making false statements contrary to Section 106 (1) of the Representation of the People Act 1983.

The Labour councillor will appear at Waltham Forest Magistrates' Court on Tuesday, April 17.

Posted by The Bournemouth Nationalist at 11:02 pm No comments:

The MP behind honours row admits drunken hotel romp with girls triggered the "cash for honours" affair was at the centre of controversy yesterday over an incident in which he kissed and fondled two teenage girls on a hotel bed.

Angus MacNeil, a married father of three who represents the Western Isles, apologised for the hurt and embarrassment caused by his actions, which he "bitterly regretted".

Mr MacNeil, 36, whose wife was pregnant at the time, took the teenagers back to his room after meeting them in a bar in Orkney shortly in 2005 after becoming an MP.

One of the girls, Judie Morrison, 19, the daughter of a Church of Scotland minister, told a Sunday newspaper that they had engaged in "heavy petting" but were too drunk to have sex.

The Scottish National Party MP lodged the complaint with Scotland Yard which led to Tony Blair becoming the first Prime Minister to be interviewed by the police in a corruption inquiry.

Miss Morrison, who was 17 at the time, said that she and a friend, Catriona Watt, both from Stornoway on the Isle of Lewis, met the MP in a bar. She told the Sunday Mail: "He came over and was buying us lots of drink. We were having a good time and when he asked us to go to his room we said yes.

"We got to his room and we all ended up in one bed. We were having a giggle and he was being very suggestive.

"He took off some of his clothes and I was sitting on the end of the bed and Catriona was lying beside him in the bed.

She added: "He was excited but we did not have full sex. We were all too drunk."

Miss Watt, 19, said: "I kissed and cuddled and fondled him." She added: "I knew who he was and I know why this is now news."

Both girls are music students at the Royal Scottish Academy of Music and Drama in Glasgow.

Mr MacNeil said: "I bitterly regret that this incident occurred, and I apologise to my family for causing them embarrassment and hurt.

"I also apologise to the young women involved and their families. I really should have known very much better. Yes, some foolishness took place at a post-ceilidh party, which was wrong and stupid.

"There is no allegation that anything further happened and I wish to make that absolutely clear. It was a lapse of judgment two years ago, for which I am sorry.

He added: "I am really angry with myself for allowing a Labour-supporting newspaper the opportunity to divert attention from the substantial political issues which I have been pursuing."

Last night the Scottish National Party accused Labour, which is trailing in the opinion polls in next month's Scottish Parliament elections, of dirty tricks. A member of the party's shadow Scottish cabinet said: "Every election that I have ever fought there have always been stories like this. Usually they appear in Labour papers the weekend before election, but this year, because of the polls, they are getting these attacks in early." Mr MacNeil was born on the island of Barra, off Scotland's west coast, in 1970.

A native Gaelic speaker, he studied civil engineering at Strathclyde University in Glasgow. He worked as a BBC reporter and a teacher before becoming an MP.

He has three children.

Source Telegraph.
Posted by The Green Arrow at 9:07 am 1 comment:

LEADING Ipswich councillor Stephen Barker is to appear in court next month to answer charges relating to the execution of a will. Barker, 58, of The Green, Ashbocking was summonsed to appear at South East Suffolk Magistrates' Court on January 31.

He has been charged with perverting the course of justice in relation to the execution of a will. He appeared before south east Suffolk magistrates on February 15 and the case was sent to Ipswich Crown Court.

He is due to appear in the crown court for a plea and case management hearing on April 27. Barker was leader of the Conservative group on the borough council for four years between 2000 and 2004 when it was in opposition.
http://www.eveningstar.co.uk/content/eveningstar/news/story.aspx?brand=ESTOnline20
Posted by The Bournemouth Nationalist at 12:23 am No comments: