A British member of the European Parliament (MEP) has been found guilty of 21 charges of deception by falsely claiming benefits.

Ashley Mote, 71, a former Ukip representative, was found guilty of eight charges of false accounting, eight of obtaining a money transfer by deception, four of evading liability and one of failing to notify a change of circumstances.

The MEP for south east England was acquitted at Portsmouth Crown Court of a further four charges in the case brought by the Department of Work and Pensions.

The four-week trial heard that Mote ran a successful business which collapsed in 1989. He then began to claim income support, housing benefits and council tax benefits but failed to notify the benefits agency when he began earning money through various enterprises, including spread betting on currency markets during the period of February 1996 and September 2002, during which period he received £73,000 in benefits.

The court heard he used this money to pay off credit card debts which he had run up funding an "extravagant lifestyle" such as restaurant dinners, private health care and holidays to the US, France and the Caribbean.

The married father of two was elected to the European Parliament in 2004 as a member of Ukip which threw him out of the party just days later when they discovered the charges against him. He has continued to serve as an independent MEP.

Responding to the verdict Ukip leader Nigel Farage said in a statement: "We are pleased that finally justice has been done.

"Mr Mote lied to Ukip on his application form to be an MEP candidate. If we had discovered just 48 hours earlier that this case was pending he would never have been elected an MEP.

"Subsequent to our discovering the truth Mr Mote was immediately removed from the party and never took his seat as a Ukip MEP.

Ukip and the voters of the south east have been defrauded for three years by Mr Mote." 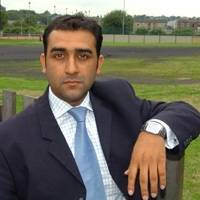 A SHAMED former West Yorkshire councillor has been spared jailed despite being convicted of trying to rip off Kirklees Council by fraud.Ex-Heckmondwike Liberal Democrat councillor Tabasum Aslam, pictured, was last month convicted by a jury on four charges of dishonestly producing a false document to obtain benefits.But a judge yesterday ruled out a prison sentence as the loss of his "good name and character" were punishment enough.

http://www.yorkshireeveningpost.co.uk/news?articleid=3101675
Posted by The Bournemouth Nationalist at 8:11 pm No comments:

A TOP Kirklees councillor facing investigation over a £1,300 phone bill has quit his position on the Standards Board for England.

Mehboob Khan, Kirklees Council’s Labour group leader, stepped down as his party’s national representative on the board.

The move came after the board confirmed it would look into complaints Clr Khan ran up the bumper bill on personal calls – including several to a friend in Uzbekistan – from a council office.

Clr Khan said: “This has been standard procedure in the past when board members have had allegations made against them.

“The appropriate thing to do is to temporarily distance yourself, so there can be no accusation of unfair dealings.”

He added: “I welcome the fact the Standards Board are looking into the allegations and hope that this will be the opportunity to establish the truth.”

BNP group leader Clr David Exley reported Clr Khan to the Standards Board after it emerged he had been using a phone in the Labour group’s office.

A Standards Board spokesman said the fact it was investigating did not mean Clr Khan had done anything wrong.

He said: “This process is simply a case of establishing the facts. There is no presumption of the outcome.

“It is not a case of ‘there’s no smoke without fire’,” the spokesman added.

He said the case was being investigated at a national level, rather than at local level like other ones.

“Cases that are investigated at a national level tend to be more complex, involve a potential conflict of interest or require powers beyond those of the local authority,” he said.

The process will take about six months and there are several possible outcomes.

Investigators may conclude that no further action is necessary.

They may hand the matter to the council’s standards committee, which has the power to impose sanctions, including suspending Clr Khan from the council.

Or they may pass it to the adjudication panel for England, which has much more far-reaching powers, including long-term suspensions.

Clr Khan said he was confident his name would be cleared.

And he took a swipe at opposition councillors, accusing them of making political capital out of the investigation.

He said: “I’m annoyed that certain other politicians have used the fact that I’m not allowed to talk in detail publicly about this matter to smear me.

“I think they should refrain from making any comments until the outcome is known.”

Tags: Labour, Fraud
Posted by The Green Arrow at 10:14 pm No comments: