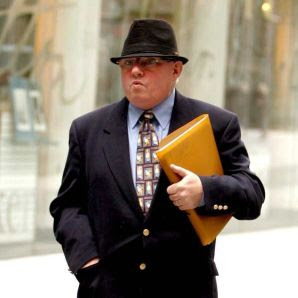 Noel O'Brien shoved Joanne Subocz and threw her hat on the road after she caught him parking illegally in Manchester city centre.

O'Brien, 58, shouted a torrent of racist abuse at Polish-born Miss Subocz , telling her 'go back to your own country, we don't want you here'.

Miss Subocz said the incident left her shocked and for weeks she was afraid to go back on the streets.

He told O'Brien: "This was an unpleasant piece of behaviour on a woman from another country doing her public duty. She was assaulted and bullied in a nasty fashion.

"If I don't get a favourable report on you I will have no option but to impose a custodial sentence."


Quote - "It left me shaking, it was a horrible experience."
Joanne Subocz

Miss Subocz said O'Brien, a former councillor in Haslingden, Rossendale, swore and pushed her after he parked on a suspended bay in St Mary's Parsonage last January.

She said: "It left me shaking, it was a horrible experience."

Four witnesses told how O'Brien rounded on the warden and screamed abuse. Jennifer Lynch said he was agitated and aggressive.

"He charged towards her like a bull," she said.

O'Brien, of Mercer Crescent, Haslingden, had denied the charge but didn't give evidence in his defence. He refused to recognise the court after the judge said he could not cross-examine civilian witnesses.

A previous bench appointed a lawyer on O'Brien's behalf to test the evidence, avoid unnecessary distress to witnesses and ensure the trial ran efficiently.

O'Brien accused the judge of denying him his civil right. He said: "I'm taking no further part in the proceedings. This is a joke - it's a pantomime."

Source
Posted by The Green Arrow at 8:05 am No comments:

A councillor is potentially facing political ruin after he was sacked by his party following an arrest for fraud.

Cllr Vijay Shah, Wembley Central ward, was arrested at his home in Clayton Avenue, Wembley, on March 8 by officers from Hertfordshire Police.

A Hertfordshire Police spokeswoman said: "A 44-year-old man from Wembley has been arrested on suspicion of fraud by abuse of position.

"He was arrested on March 8 by officers from Hertfordshire Police. He has been bailed by Police until 10 of September, to return to Watford Police Station."

The Times understands that Mr Shah was suspended by the Liberal Democrat party on Saturday May 11 by party leader Paul Lorber.

A Brent Councillor has been charged with fraud after a seven month police investigation.

Councillor Vijay Shah was arrsted in March this year in relation to his role as an accountant at EJ Masters delivery company, in Kings Langley, Herfordshire.

He was charged with fraud by Hertfordshire Police on Monday, and has been bailed to appear at West Herts Magistrates Court on November 7.

Mr Shah, of Clayton Avenue, Wembley, sits as an independent councillor after being thrown out of the Liberal Democrat Party shortly after his arrest.

A former Liberal Democrat councillor has been jailed for 12 months for stealing £55,000 from the company in Hertfordshire that employed him.

Shah, 45, continued to sit as an Independent for Wembley Central on Brent Council after his arrest, St Albans Crown Court was told.

His deception was uncovered when he lost his job over another matter.

Shah gave a false reference to a woman from India who had applied for a job, the court heard.

A new accountant was hired and Shah's fraud was discovered.

"Those who take public office have incurred a responsibility to ensure they are above reproach. You singularly failed to do this."

Tags: Fraud, Lib Dem
Posted by The Green Arrow at 10:16 pm No comments: