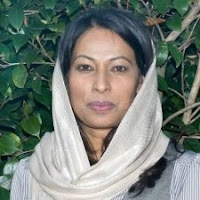 A key supporter of Tower Hamlets' extremist-linked mayor, Lutfur Rahman, today pleaded guilty to three counts of dishonestly claiming housing and council tax benefits – the second time she has been convicted of such offences.

Councillor Shelina Akhtar failed to turn up in court at the start of the case today, claiming that she was unwell and unfit to stand trial, but the judge dismissed her claim and issued a warrant for her arrest. When she finally appeared this afternoon, Judge Platt told her: “I make you no promises today. This is the second time you have committed fraud against the state regarding benefits to which you are not entitled. The court needs to know more before deciding on the appropriate sentence.” Akhtar cheated the taxpayer of just over £1100 in benefits. She will be sentenced next month.

Full Story and Source
Posted by The Green Arrow at 6:10 pm No comments: