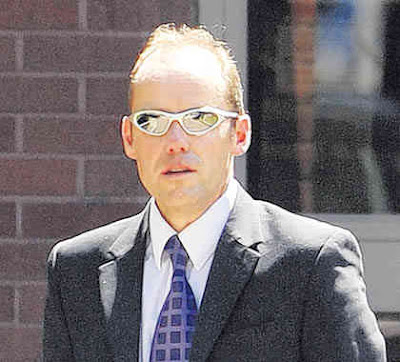 Coun Ian Hillas, who represents Castle Bromwich ward on Solihull Borough Council, was appearing before Warley Magistrates. He was charged with sexual assault on a woman after being arrested by police.

The 42-year-old, pictured, from Oakwood Croft, Solihull, is a cabinet member for economic development and regeneration and the former deputy leader of Solihull Council.

A West Midlands Police spokeswoman said: “I can confirm a 42-year-old man from Solihull was arrested on Monday morning on suspicion of sexual assault.

“He is appearing before Warley Magistrates court today charged with sexual assault.”

Coun Hillas works in financial services and is listed as a director of East Birmingham and North Solihull Regeneration Zone and also for Coventry, Solihull and Warwickshire Partnership.

He was elected on to Solihull Council in June 2004 and is not due for re-election until May 2011.

The councillor plays a major part in the running of services in Solihull including sitting on the panel which appoints the director of children’s services, along with being heavily involved with the Richard Knight Charity, which maintains upkeep of the St Mary and St Margaret Parish Church in Castle Bromwich.

A Solihull Council spokeswoman refused to comment on the arrest and what procedures took place if a councillor was charged with any offences.

A senior Solihull councillor will face trial on a charge of sexually assaulting a 16-year-old girl.

Coun Ian Hillas, 42, a former deputy leader of Solihull Borough Council, appeared at Warley Magistrates’ Court yesterday and was granted conditional bail. He was committed for trial at Wolverhampton Crown Court and will firstly face a plea and directions hearing on September 1.

Hillas, of Oakwood Croft, Solihull, who represents Castle Bromwich for the Conservatives on Solihull Council, has pleaded not guilty to one charge of a sexual assault in Cradley Heath.

Posted by The Green Arrow at 6:16 am No comments: