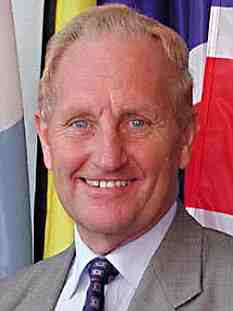 Den Dover
A senior Tory MEP was last night thrown out of the party as he faced a fraud investigation over an expenses scandal.

Brussels chiefs have already ruled that Den Dover is guilty of a 'conflict of interest' and 'unaccountable expenditure' by paying his staffing allowance to a family firm run from his £1million home.

David Cameron had previously expressed his determination to root out MPs and MEPs who abuse their expenses and allowances.

So hours after learning that Mr Dover had been censured, the Tory leader took the toughest action open to him.

Mr Dover can only be stripped of his seat by voters, but he has been expelled from the party and will be unable to seek re-election as a Tory.

The case has also been referred to the European anti-fraud unit OLAF.

In June, Mr Dover was forced to resign as Tory chief whip in Brussels after admitting that he paid £750,000 of taxpayers' money to MP Holdings, a company he set up after joining the European Parliament in 1999.

EU officials said there was a conflict of interest involved because the former Chorley MP had an 'economic interest, or any shared interest, with the beneficiary' of the public money.

Mr Dover, 70, also spent £32,400 on repairs to the MP Holdings' headquarters, located at his home in Borehamwood, Hertfordshire.

Tags: Conservative, Fraud
Posted by The Green Arrow at 6:05 am