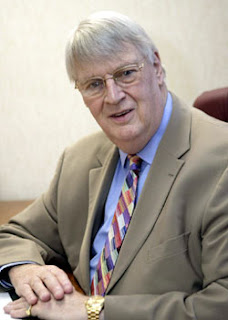 Not so smug now Bill Thomas
Sandwell Council leader Bill Thomas has quit after being charged by police with theft.

Coun Thomas, aged 69, resigned as council leader today, although he remains a councillor. He was one of the West Midlands’ longest serving council leaders.

Deputy Labour group leader Steve Elking has taken over the task of leading the council.

Details of the alleged offence are unclear, but Sandwell Council chief executive Dr Allison Fraser confirmed that Coun Thomas had decided to stand down.

Dr Fraser said: “The council has been notified that a 69-year-old man has been charged with theft.

“We have been advised by police that this is a personal matter. The council has not been approached by police about their investigation.”

Coun Thomas’s decision to quit was reported to shocked colleagues at a Sandwell cabinet meeting this morning.

Coun Eling said: “Coun Thomas’s resignation is for reasons which are wholly unconnected with the council and his role here.

“For us it is business as usual. We have recently strengthened the leadership team by appointing a third deputy.

“I as leader and councillors Pauline Hinton and Darren Cooper as deputies are available to ensure council business goes ahead smoothly.”

Magistrates were told three cheques worth a total of £1,300 had been paid out from a NatWest bank account belonging to the 69-year-old to close friend Gareth Hall between April 21 and 24 last year .

Thomas later reported to the bank that he did not know Hall and the cash was reimbursed, but following his arrest Thomas admitted to police he had known Hall for six years.

The Labour councillor and former headteacher, who was arrested last month and resigned immediately as council leader, had originally vowed to fight the charges before pleading guilty today.

He was handed a conditional discharge for 12 months and ordered to pay back the £1,300 in compensation and costs of £145.

The court was also told Thomas, of Viking Rise, Rowley Regis, was stepping down from his role as councillor for the Rowley ward.

Gareth Hall, aged 28, also of Viking Rise, pleaded guilty at Sutton Coldfield magistrates today to fraud by false representation. He admitted using Thomas’ credit card nine times without his knowledge as well as writing cheques belonging to Thomas out to himself.

The case against Hall was adjourned until December 4. He was granted bail.

Source
Posted by The Green Arrow at 7:54 am