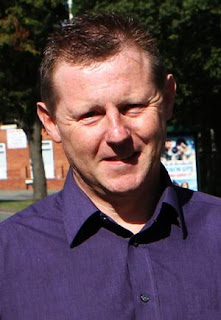 Mark Burton
A COUNCILLOR has been remanded in custody and suspended by his party after being charged with two sexual offences.
Mark Burton was arrested only days after this month’s council elections and was charged with two offences, one against a child.

Councillor Burton was re-elected to serve the Harrowgate Hill ward on Darlington Borough Council for a second four-year term on May 5.

The 42-year-old Labour councillor was arrested three days later and charged with an offence of sexual assault and a second for sexual touching of a child.

He later appeared in front of magistrates in Newton Aycliffe, where he was remanded in custody until his next hearing on June 15. No pleas have yet been entered.

He has been suspended by his party pending the outcome of the investigation.

A Labour North spokesman said: “Coun Mark Burton has been placed on an administrative suspension from the Labour Party and Darlington Labour Group pending the outcome of police inquiries. “He is unable to hold any position with, or represent, the Labour Party during his suspension. “It would be inappropriate to comment further until police investigations are complete.”
A spokeswoman at Darlington Borough Council said: “Coun Mark Burton has been charged with two offences of a sexual nature.
“The case is still being investigated by the police and the usual child protection procedures are being followed. "We understand that he is currently remanded in custody. “The councillor has been suspended from the Labour group and has therefore not been put forward for seats on any of the committees. “At this stage, the council does not have powers to take any action to suspend him.”
She added that ward matters in Harrowgate Hill would be dealt with by the two other Labour councillors – John Vasey and Marjory Knowles.

Coun Burton was first elected in 2007 when he polled 706 votes. In this month’s election he topped the polls across the borough with 1,261 votes in a keenly-fought contest.

The councillor, who is a warehouse operator at Glaxo- SmithKline, in Barnard Castle, has a reputation for working hard on behalf of constituents.

Source
Posted by The Green Arrow at 10:02 am

They have at LEAST one banned drunk driver on the liebor benches too.
Patrick Malcolm Wright.

let me tell you all something this guy is my dad and he did NOTHING. The girl that should be exposed is 'LOUISE DAVISON'. A fucked up child with a past of a drugged up father and a mother that is unstable bringing in a new father that is extremely stricked, that stricked infact she cut her wrists on a number of occasions for attention and got none, smokes and drinks at 14.. whats the next best way to get attention?.. well it worked.. she is now in care because her mum cant cope with her.. i dont need to say any more.. im not gonna go through it all but my dad is compleatly inocent and any one who knows him would say the same, its only a matter of time before the truth comes out, this government and whole criminal justice system is fucked up, and for all you who have something to say and for idiots putting my adress up there.. fuck you. i hope you go through the same thing one day

But he's also been charged with another alleged sexual asaault against an adult. What have you got to say about that?

What was your dad doing around a vulnerable young girl anyway?? Please tell us

Enplane The Most talented Deals On [url=http://www.bodybuildingrx.com/products.html]Body Supplements[/url]. You don't conceive of how good these are for you. Not on a wholesome

diet? Than you need to receive supplements in behalf of your substance or you when one pleases slowly get nauseated as you become older. How

hard is it to ingest joke dispense of vitamins everyday? It's not. And it ordain preserve years on your moving spirit! Try my Gurantee

or your gain back! I at one's desire herself guarentee that you drive get in good health and notice a gigantic discrepancy or you

go to your shekels side with! No B.S. Substantiation it missing!

Another one for you.

HI, I just joined this community. I m from romania. I like this forum.......hope to learn lot of things here ;-)

Burton's still a councillor. Labour must be pleased D:

What about Zoe Hancock? It's not the first time.Slippery bastard

Burton's in cloud cuckoo land. Labour don't want him because he is a hideous embarassment and he turned up at a council meeting so he can continue to get expenses!

Has he been found guilty yet and gone to prison or not? been a while now.

He was charged and there will be a trial this year

The kid's in care thanks to paedo Burton more than anything else!

thief aswell as a sex offender.

anyone got an update on this

yeah we need to know whats going on with this guy

He was suspended from Labour but not yet expelled and claims to be an Independent. he turns up at council meeting once every six months simply to get his allowance and in return holds no surgeries, does no casework and cannot be contacted by anyone in his ward.He's still Labour25 for now as they haven't booted him out yet

Burton, 43, of Middleham Road, Darlington, was due to stand trial at Teesside Crown Court yesterday for downloading the photos and was due to face trial next month for the sexual assault – but he will now be sentenced in three weeks time following the guilty pleas.

a passage from the Northern Echo today !!!!!

Councillor Dixon, who is also Darlington Labour group leader, said: “It is not clear if I have the legal authority to stop his allowance, but I am doing it now anyway because I think it is morally the right thing to do. He can sue if he disagrees. I am calling on him to resign immediately.”

Possession of child pornography as well. Yes, this is a typical Labour Cllr.

Labour never got rid of him as a member, he just let his membership expire. He got six and a half grand in allowance while waiting for trial.

So much for being innocent then declan, hes pleaded guilty to all charges.
I have a daughter aged 13, hes a Filthy pervert and needs locking up with those nice murderers, they'll sort him out, i hope they cut off his cock.
Typical labour as well, rob the tax payers to fund his own greed.
Get this scum off our streets.

He will be sentenced for both offences on Thursday. If he is ordered to serve a jail term of three months or more, he will be automatically disqualified as a councillor.

miserable git trying to get sympathy with a sob letter, saying how he's lost everything and has nothing to live for now...well do us all a favour and hang yourself.
Bet his guilt wouldnt have made him hand himself in to the police or quit as a thieving councillor.......
No, hes only sorry coz he got caught, He would be carrying on as normal and still out to abuse kids if the young lass hadn't been brave enough to shop him....

coming to a school near you!!!