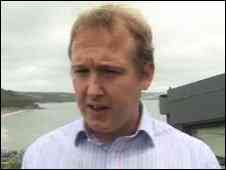 Huw Elystan Davies, of Ewenny Road, Bridgend, also a town councillor in the area, had his case committed to Crown Court for trial.

The 37-year-old faces charges of rape, possessing cocaine and supplying cocaine at his home between November 16 and 17 last year.

He was released on conditional bail until his appearance at Cardiff Crown Court tomorrow.

Davies is head of Welsh at Brynteg Comprehensive School, Bridgend.

Source
Posted by The Green Arrow at 7:55 am