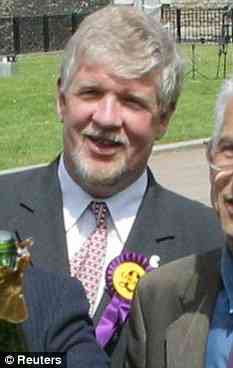 He is thought to be the first MEP to face criminal charges over the use of Parliamentary perks.

Wise, 60, a former policeman, was arrested in June last year after it was revealed that he had allegedly siphoned off nearly £40,000 of public money by claiming it was for a researcher’s salary.

Detectives investigated after it was claimed Wise only passed on some of the cash and banked the rest. He allegedly spent £6,500 on a Peugeot 406.

He was alleged to have pretended that his own bank account was that of his then researcher Lindsay Jenkins which is against EU rules.

Wise and Jenkins were jointly charged following a nine-month police probe. They pair were released on bail and will appear at Westminster Magistrates’ Court next Monday.

The £62,000-a-year MEP faces a maximum 14 years in jail if found guilty of money laundering. The maximum term for false accounting is seven years.

Wise now sits as an independent MEP for East Anglia after being dismissed from the Rightwing party.

News of the criminal charges will once again turn the spotlight on the Brussels gravy train.

Wise’s lawyer, Stephen Welfare, said: ‘Mr Wise denies any intent to deceive or any unlawful wrongdoing whatsoever and he will be fighting the allegations in court.’

He said neither Wise nor his family had profited and said there had been no loss to the European Parliament.

He added: ‘It is frankly scandalous that Mr Wise has been charged with criminal offences.’

Source
Posted by The Green Arrow at 9:32 am