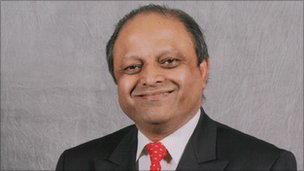 Pervez Choudhry, of Tuns Lane, Slough, had married his second wife in Pakistan but was still legally married to his first "arranged" wife.

He was given a community order with a nighttime curfew, ordered to pay £5,500 to his second wife and fined £750.

Wheelchair-bound Choudhry married his first wife in 1986 and the pair had three children, the court heard.

He said this was an arranged marriage after his family had decided he would wed his first cousin when he was aged 11.

They separated in 2007 but remained legally married, it was heard.

In October 2008 he met his second wife Dr Zabina Shahian but "untruthfully" told her he had been legally divorced, Judge Ian Grainger said.

Two months later the pair married in Pakistan, but she left him over concerns his first marriage may not have legally ended and hired a private detective to investigate.

Choudhry, who vowed to take his case to the Court of Appeal, claimed the religious ceremony in Pakistan was not recognised under UK law.

He told BBC News after the hearing: "I had no intention of deceiving anybody. I was simply trying to create a family unit."

His second wife Dr Shahian said: "I was very devastated [when I found out he was still married].

"My life has been at a standstill. When I met him I took him at face value."

Choudhry defected to the Tories in 2009 after being elected as the Labour candidate for Central Ward.

He was arrested and charged with one count of bigamy in August 2010.

He was suspended from the Conservative Party pending the investigation and stood as an independent, but lost his seat at the election earlier this month.

Source
Posted by Zultra at 9:33 pm

Check out Samuel Gamlin of Newcastle. A former Labour 'spin doctor' who was charged with CP offences.

Good thing this smug, lazy git lost his seat. His attendance record stinks. That he now has been exposed as a slimebag comes as no big surprise.

THE SUPRISE HERE IS HE DIDN'T USE THE STOCK ANSWER THAT HAVING A NUMBER OF WIVES JUST LIKE HAVING SEX WITH CHILDREN IS LEGAL IN MY COUNTRY.

Why does Joe Anderson in Liverpool seem to have a pig's head on his shoulders?