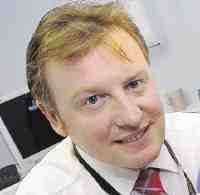 A FORMER West Lindsey councillor and Liberal Democrat parliamentary candidate appeared in court on Thursday, to deny a charge of sexual assault.
Dr Adrian Heath, a dentist, is alleged to have touched a woman's breasts during an incident on 13th August last year.

The 43-year-old former councillor entered a not guilty plea during a short hearing at Lincoln Crown Court.

Judge Michael Heath agreed to an application for Dr Heath's trial to be moved out of Lincolnshire because he is so well known in the county.

Dr Heath, of Roseberry Avenue, Lincoln, was granted bail on condition that he does not contact the complainant.

A dentist who once ran for Parliament groped three patients while supposedly checking their glands, a court was told yesterday.

Dr Adrian Heath, 43, touched the women in the examination chair at his surgery in a way that had 'no clinical justification', a jury heard.

He allegedly told one of them he needed to compare her breasts and even asked her to remove her trousers after warning: 'This is serious.'