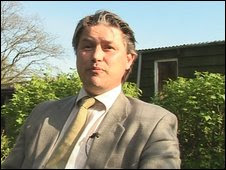 A hearing has found the former deputy council leader of Somerset County Council guilty of two counts of breaching codes of conduct.

The two-year investigation looked into dozens of complaints about the behaviour of Liberal Democrat councillor Paul Buchanan.

Mr Buchanan has been disqualified from being a councillor for two years.

The tribunal heard he made written allegations of serious misconduct against chief executive Alan Jones.

On Wednesday the panel ruled Mr Buchanan had "brought the office of [the] member into disrepute" and "used his position as a member to confer a disadvantage on Mr Jones". He was disqualified from local government for two years.

Panel chairman David Laverick said the respondent "was motivated by a desire to cause harm to the chief executive".

Mr Laverick said: "This is a case of revenge rather than intimidation. It was an act of revenge."

Speaking after the tribunal Mr Buchanan said he was "very disappointed" at the overall adjudication panel's findings.

He said: "I'm pleased my case that I clearly didn't seek to intimidate Mr Jones was upheld.

"[But] I'm disappointed the rest of the charges weren't dropped and the panel found, in their view, my making a formal complaint about the chief executive constituted an attempt to cause him a disservice or some harm."

The row had split the council chamber. Mr Buchanan had been thrown out of the Liberal Democrat group, although some members had backed him saying the disciplinary process was "excessive".

Former Liberal Democrat councillor Jim Mochnacz it should not have come to such a conclusion.

He said: "It should have been mediated at a much lower level. It says something about one, if not two of the characters."

In a statement Somerset County Council said: "We are pleased that everyone who wanted to has had the opportunity to make their case to an independent tribunal.

"This is a very clear decision and we hope this will end the matter once and for all. Paul Buchanan chose not to stand for re-election in June and no longer has any connection with Somerset County Council.

"We will not make any further comment until we have seen the full findings from the panel."

Source
Posted by The Green Arrow at 10:00 am