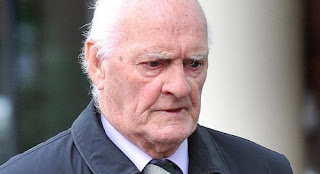 Former Worcestershire County Council leader George Lord has been jailed for four years for a series of sexual assaults.

The 79-year old was sentenced at Birmingham Crown Court this morning (Tuesday).

It was reported last month how Lord had pleaded guilty to three charges of indecent assault on a girl in the 1970s when he was a lay minister of a church in Droitwich and performed a number of sexual acts on the teenager.

He had already been found guilty of sexually assaulting a 19-year-old in the council chamber at Worcestershire County Council in 2010.

Lord was told he will spend at least half of his four year sentence in jail.

Source
Posted by Zultra at 5:40 pm

Wow, 2010? That chap doesn't look like he'd be in the condition to assault anyone recently.